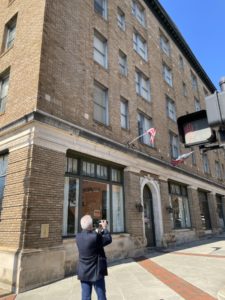 Progress — Forward or onward movement toward a destination. Big decisions and projects take time. That’s why the best way to describe City Council’s most recent actions is “progress.” The decision to move forward with redeveloping the Vance Hotel, the approval of a location to house a new fire station one, and the authorization to finance two major utility projects are important actions that indicate Statesville is moving in the right direction on the future growth of the City.

The Vance Hotel, the keystone of our beautiful downtown, has needed redevelopment for many years. There has been much interest in the hotel, and the City has received proposals with merit, but for various reasons have not made it to the point of execution. The redevelopment of a 100-year-old hotel is not an easy one, and the progress toward that redevelopment has been painfully slow. Over the last two years the City has been working toward a development agreement with a third party that will bring life back to the building. City Council approved that agreement at their last meeting. Is it perfect? Nothing is, but it is progress and my hope is that this project contributes to the betterment of Statesville.

“The Rock,” or Fire Station 1, is located on Meeting Street downtown and is almost 70 years old. The engines and associated companies in that building run the most fire and medical calls of all four stations, but the building is tired and in need of major renovation. The City has been examining replacement options for several years, and at times it has been a contentious process. However, after reviewing several potential locations, one site has come to the top that will provide the best replacement coverage for Station 1. City Council unanimously voted to move forward with that project and we hope to have a new Station 1 within the next 18 months to two years.

Finally, but not least importantly, the City Council moved forward with the financing of two major utility projects. The first is a major infrastructure project which includes updating the sewer lines along Sullivan Road and a portion of Salisbury Road. This overhaul is needed to fix longstanding problems with those lines. The second is an economic development project, which will finance the extension of a water line to serve the Larkin Commerce Park. This project will bring investment and jobs to Statesville, and hopefully kickstart this development that originally was annexed into the City some twelve years ago.

Of course, there have been many past actions that have helped Statesville move forward. But it seems that these three major decisions, coming all in one meeting, are worthy of noting. They are the result of multi-month — and in some cases — multi-year efforts and will have long term impacts on the City’s future.