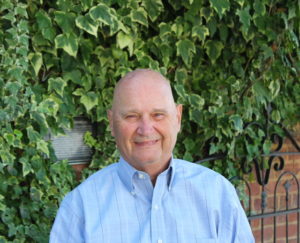 Mooresville, NC – Mooresville Downtown Commission (MDC) Board Treasurer Hugh Sykes was named Downtown Mooresville’s 2020 Main Street Champion during a virtual recognition ceremony by the North Carolina Main Street Program on March 11, 2021.  The MDC is an active member of the program, which works to stimulate economic development within the context of historic preservation across the state. North Carolina Main Street Champions are individuals awarded annually in recognition for their strong sense of commitment to their respective Downtown communities.

Hugh was nominated by the MDC for the award due to his 12+ years as a dedicated Board Member, his numerous contributions as a longtime volunteer, and for his steadfast devotion to the betterment of Downtown Mooresville.  Originally from Mooresville, Hugh is well-known throughout the community.  His reputation as an established Downtown advocate combined with his easygoing, good-humored, caring demeanor has helped strengthen local relationships for the MDC.

Hugh has owned and operated several businesses within the Downtown Mooresville municipal service district and his diverse professional experience and amiable approach bring valuable perspectives to the MDC Board of Directors.  He currently serves as the treasurer for the Board, and is always ready to lend a hand, an ear, or his support for any type of MDC initiative, putting in countless hours of his personal time.

During his tenure as a Downtown Mooresville business owner, Hugh single-handedly and voluntarily managed the Downtown Mooresville Cruise-In event for many years. The highly organized and well-respected event regularly attracted as many as 600 classic cars and spectators from across the region, delivering multiplied exposure for the heart of Mooresville.  Hugh’s long-standing loyalty and beloved enthusiasm indeed makes him a cherished champion for Downtown Mooresville, and the MDC is extremely grateful for his service.

The MDC creates, facilitates, and promotes the vibrancy of the heart of Mooresville through engagement, support, advocacy, and leadership.  For additional information, please contact Kim Atkins, Executive Director, at kimatkins@downtownmooresville.com.