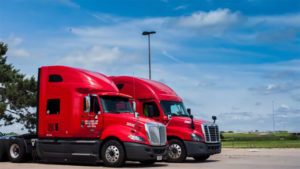 While the grand opening of the Crete Carrier Corporation’s new terminal was another event to fall victim to the concerns of social distancing, the company was still proud to open up its new facility in Statesville this month.

“We had a facility up in Greensboro that was a little small for us. We’ve been growing our driver count and customer base here int he Carolinas and needed a place bigger, so we were happy to find this place here in Statesville,” Tim Aschoff said. He is the president and COO of Crete Carrier Corporation.

For Statesville, it brings just over a dozen office jobs into the area as well as the roughly 300 drivers that will come in and out of the terminal. He said the company has roughly 5,700 drivers working out of their 31 terminals spread about the country.

Crete Carrier is based out of Lincoln, Nebraska. Most of their shipping involves food and consumer packaged goods, as well as home improvement and retail.

The terminal allows drivers to get support from the company, whether that’s training, licensing, or other services. With so many of the driver’s handling so-called over-the-road trips that have them traveling for a few days to three weeks at a time, the facility also offers laundry, bathrooms and showers, and a driver’s lounge area. They also have plenty of parking on site.

Fleet Manager Erica Ingram said the company made a strong recruiting effort in the area once they decided to move from their older and smaller facility in Greensboro to the new and more spacious one in Statesville. She said previously drivers weren’t always stopping there due to the limited size and amenities, but that won’t be a problem here. Ingram said that having their own place, as opposed to one they’d share at a public truck stop, gives Crete Carrier an advantage as well.

“Being in the pathway and convenient for our drivers to stop through, it’s more convenient that Greensboro was. Statesville is a big opportunity for us to add to our portfolio with new customers, which also will bring additional job opportunities to a lot of people,” Ingram said. Aschoff echoed that by saying the proximity to several interstates and highways was another reason to move the facility to Statesville.

Aschoff said he hopes to increase their driver base in the area and to be part of the greater Statesville community as well.

“While we’re a much larger company, we still like to feel that we’re a local member of the community,” Aschoff said.