Construction Could Start This Year on Upscale, Waterfront Hotel on Lake Norman 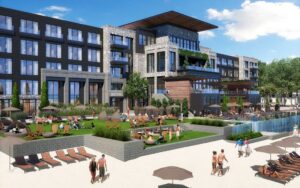 A local real estate developer’s plan to bring an upscale hotel to shores of Lake Norman appears to be moving forward, several years — and revisions — after it was first envisioned.

Brett Krueger told The Charlotte Observer that the $250 million project, called Sunset Cove, could break ground as soon as the second quarter of this year.

The project is expected to include a luxury, boutique hotel with about 30 rooms, a restaurant and possibly a spa, as well as hundreds of condominiums. The Observer reports Mooresville town commissioners this week signed off on a request to annex the roughly 15-acre site, after approving a rezoning for the project in September.

The site is off Alcove Road in Mooresville, near the Langtree at the Lake development and Lowe’s (NYSE: LOW) headquarters.

The latest iteration of Sunset Cove is a scaled-down version of Krueger’s early plans, which he detailed to CBJ in the fall of 2019. At the time, plans called for an 82-room hotel with a spa, beach club and convention space in addition to the residential component.

Krueger has been involved in other notable hotel projects, including The Ivey’s Hotel in Charlotte. That project transformed the uptown building once home to Ivey’s department store into a posh lodging option that has since racked up national accolades. He was also tapped to remake the historic Empire Hotel in Salisbury and is working on plans for a mixed-use project in Asheville.

Sunset Cove would be the first high-end accommodations on the LKN waterfront. There is currently just one lakefront motel — the Lake Norman Motel and Marina in Sherrills Ford, with 13 modest rooms above The Landing restaurant and tiki bar.

Also this week in Mooresville, commissioners tabled a decision on rezoning and annexation for a sprawling residential development and signed off on incentives for a manufacturing company’s expansion.