Census 2020: NC gains a 14th seat in the House of Representatives 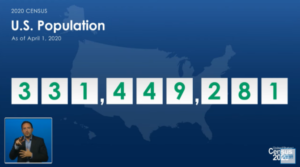 North Carolina had the 6th largest increase among the states and was the 15th fastest-growing state.

Is this what we were expecting?

We expected a population somewhere between 10,550,000 and 10,580,000, based on estimates from the U.S. Census Bureau and population projections from the North Carolina Office of State Budget and Management. The official census count is more than 100,000 fewer individuals than we expected.

Are there parts of the state losing population?

What does this mean for North Carolina?

North Carolina gained a 14th seat in the U.S. House of Representatives.

How are these population numbers affected by the topics we have written about in previous blog posts such as COVID-19, the since-dropped immigration question, the lawsuits filed by the Trump administration, and the shifting Census end date?

We don’t really know yet. These events obviously made the Census population count more challenging, as we wrote about in the following blog posts:

More information will be released in the coming weeks and months, and we will continue to share what we learn about ways these events and others affected the overall count.

Do we know how the state districts will be redrawn?

Which states gained seats in the House?